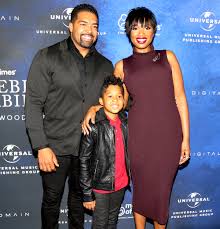 I wear a short Afro and have my hair cut several times a year. I love my hair with its thickness and mix of salt and pepper. There is more salt shaking these days but the salt has an orderly plan for framing my face, while the pepper fills most of the sides, back and top of my head. I usually go to see my stylist on Saturday afternoons when my schedule is more relaxed. I like the area the shop is located in – across the street from Peet’s Coffee, down the block from Arizmendi’s and a few blocks from one of the best farmer’s markets. It’s busy with all shades of people, kids in strollers, folks eating, shopping, clutching coffee cups, talking, and being with one another.

The minute I sat down in my stylist’s chair, I landed in the middle of a lively discussion about Jennifer Hudson, her partner and their son. One of the 30 something male stylists seemed to have done a lot of research on Jennifer’s business. According to him, Jennifer was taking legal action against her partner because she wanted custody of their son. Jennifer had been touring and she had been leaving her son behind with her partner, who had been doing the job of raising and caring for him. And now ungrateful Jennifer, who wasn’t carrying her weight as a mother, wanted to use legal means to get custody of the boy.

Since I wasn’t up on this story or the rest of Jennifer’s business, I was intrigued about the scoop and the commentary. My stylist, Sam (not his real name), is a man, too and it seemed as if both men were taking sides. The decision for both of them was that Jennifer was wrong. She was a bad woman and she was (and has been) doing her man and her son wrong.

I have to admit that I don’t know Jennifer Hudson. I am only acquainted with her performance as Effie in the most recent film version of Dream Girls. I really can’t take sides on something or someone I don’t know a good deal about. This does not mean that I have never engaged in such behavior before. Of course I have.

The discussion about Jennifer became even more interesting when it somehow veered toward Black women who say, “there are no good Black men.” I don’t remember whether Sam, a 70-year-old Black man, mimicked the phrase or whether he led into it with “And they say there are no good Black men.” Meaning that Jennifer’s man is good and she of course is bad. No matter, I am old enough to know that at that point in the conversation the gauntlet had been thrown down.

I declined to pick the gauntlet up and continued to listen to the two men talk. What followed was an indignant, “Well, white women are finding them!” and that was followed by a “Yeah.” Again, Sam spoke this. Again, I remained silent and chose not to pick up the gauntlet. I knew I was being baited. Sam was waiting for me to either say that I couldn’t find a good Black man (and was guilty of saying or thinking this) or rail against white women and blame them for my sorry predicament. I did neither of these things because I am neither sorry or in a predicament.

As if on cue, a gorgeous brown woman walked into the shop with a Black man, who she called “honey” as she asked him to take her jacket and she sat down in the stylist’s chair, which was opposite mine. She was tall and curvy, with great cheekbones, and wavy black hair. She might have been Asian, Latinx, Native or Multiracial. After all, we were in Oakland, and everyone lives and loves here; the ethnic possibilities are endless. We smiled at each other when Sam turned my chair in her direction. I wanted to stand up, look Sam in the eye and say “Ha!” but I also wanted a really good haircut, so I restrained myself.

The truth is that, like Jennifer Hudson, in the past I have been cast as a bad woman. I’ve been called bad for telling the truth, and bad for being independent. A friend’s husband once asked me why I didn’t call on him for advice when I bought my first car. The truth was that was confident in my evaluation and negotiation abilities to do what I needed to do to buy the car. I had a mechanic look it over. I negotiated a fair price. I bought the car. That was that. The fact that I didn’t ask him for advice wasn’t personal. However, this man was not implying that I was a bad woman. I had recently moved to California to attend graduate school and I needed to buy my first car. I was from New York City and had only borrowed cars for shopping trips to New Jersey or rented cars when I had needed them for road trips. My friend just wanted to be helpful and make sure that I would get a good deal.

On the other hand, the bad woman shaming I have experienced usually occurs through comparison. One of my ex boyfriends was a master at bad woman shaming. He once stated “Why don’t you cook for me when I visit you? A woman cooks for her man when he visits her.” His reasoning was that I did not cook for him, so I was a bad woman, bad girlfriend. I was not moved to change my ways.

This same ex boyfriend also compared my spending time with him to my watching a sunset by myself. I’d asked him if he’d wanted to come with me to one of my favorite places during a summer evening right before sunset, but he had said no. Later that evening when he saw me, he presented the comparison in the form of a question. Did I like spending time with the setting sun better than spending time with him? I told him that the question was silly. How could one compare the two things? My real answer, unstated, was the sun, definitely the sun.

Bad woman shaming can wear on a person. For the one being shamed it can mean suffocation, doubt, holding back. It can mean being miserable, but it only means these things if she believes what the speaker or the passive aggressive parent, boyfriend or relative says, for these beliefs really belong to the ones who voice them. Once the person they are trying to shame stops believing these things, even for a few minutes, she can breathe again. And that is why my time with the shaming boyfriend lasted only 6 months. Shaming is just not sustainable in a relationship with anyone. I’ve very happily been a “Shamers need not apply for friend, acquaintance or boyfriend status” woman for many years now. And I can breathe.

As I mentioned earlier, I don’t personally know Jennifer Hudson, but I do know about the gauntlet that is often thrown when men are discussing gender roles and women are within hearing distance. I could have picked up the gauntlet, but I don’t think that the best time for me to share my thoughts on gender roles and shaming is when a man is cutting my hair. After all, I want to walk out of the salon looking good.

My Tweets
ed muses upon

Wordsmith with proven ability to translate business objectives into communications strategies and tactics.

An Online Venue for True Fiction

A Public Sphere for Poetry, Politics, and Nature: over 400,000 monthly users

(Somewhat) Daily News from the World of Literary Nonfiction

The Berkeley Branch of the California Writers Club

information about disaster preparation in our neighborhood